No Freedom in this Independence Day Parade 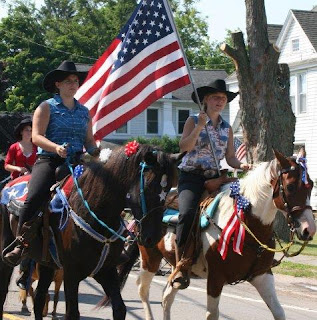 The 4th of July is all about Freedom: the huge tea party in Boston Harbor that slaked nobody's thirst but instead got folks riled enough to say "enough!". And in small towns - at least here in upstate NY and the northern tier of PA - people take their 4th of July celebrations to heart. Just about every town has fireworks, a carnival down at the Legion field, and a parade down Main Street.

Small town 4th of July parades are great fun. The parade committee chooses a theme and neighbors get together to create floats. I've seen everything from flowery princesses to a pointedly political manure spreader.  And everyone gets to participate.

Except not this year. Not in Montrose, PA. Seems that the chairman of the parade committee is censoring free speech.

This year's parade theme is "Helping Your Neighbors" - a worthy theme given that the service clubs of Kiwanis, Lions, and Rotary are sponsoring and organizing the parade.So some neighbors who have been busy helping in the community were astounded when their float application was denied.

For the past two years, these neighbors have been delivering clean drinking water to people down the road in Dimock, who have been without drinking water due to nearby drilling. They washed and waxed their water delivery truck and wanted to decorate it with some banners to let people know the "Citizens for Clean Water" are actively "helping your neighbors".

The problem seems to be that helping one's neighbors by providing fresh water is too controversial. But, hey - a couple thousand years ago the idea of feeding the hungry and clothing the poor was controversial.

Given that our country was born of a protest movement, how did we come to this moment when only "acceptable" political opinions are allowed in a parade celebrating independence from tyranny?

So this 4th of July you won't see people who have truly been helping their neighbors marching in the parade. They have been relegated to the sidelines, where they'll proudly stand with their signs and tell any and all how to get involved helping people in need.