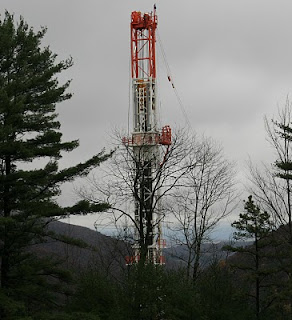 At the Finger Lakes Institute conference a couple weeks ago a representative from NY's Department of Environmental Conservation (DEC) mentioned that Chesapeake had served the Agency with a "force majeure" letter. In case you don't know what force majeure is, it's a clause in a contract that allows a contractor extra time to complete work (without penalty) in the event an act of God, labor strike, or other unlikely event prevents him from meeting the contract deadline.

Chesapeake Energy has been using "force majeur" as a blunt weapon to extend gas leases on land they have not yet drilled. The company claims that for the past 3 years they have been prevented from drilling because NY doesn't allow high volume horizontal hydraulic fracturing. They're already engaged in two lawsuits with landowner groups. Now they've rattled the cage of the very agency that approves drilling permits.

Back in February, Chesapeake wrote a letter to DEC stating that the agency should extend the leases until "certain types" of drilling were allowed. They threatened to use "force majeure" to extend the leases they have on some 15, 470-plus acres of state-owned land. Those leases, signed in 2006, are set to expire in just three months.

But visit DEC's oil and gas searchable database and you learn that over the past five years DEC has issued 166 permits to Chesapeake and the company has been actively drilling in the state - particularly in Chemung County.

It leaves one wondering whether Chesapeake understands what force majeure is - or whether they just selectively invoke it when they think they can intimidate landowners into accepting illegal lease extensions.

It also leaves one wondering: did they just threaten to extend leases on the agency that will be reviewing their permit applications? Way to win friends and influence your regulatory agency, Chesapeake! You can read Jon Campbell's article here and archived blog posts by clicking on "force majeure" in the list of topics to the right.

Posted by Sue Heavenrich at 3:04 PM