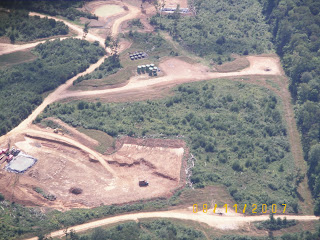 It’s official: the Marcellus shale formation, stretching beneath the northern Appalachians, contains about 84 trillion cubic feet of gas – at least that’s what the US Geological Survey said this Tuesday. This is way higher than the figure they published nine years ago- some 42-times higher. Back in 2002 USGS calculated that Marcellus contained about 1.9 tcf of gas.
At the same time, the 84 tcf figure is way lower – some 326 trillion cubic feet lower – than the estimate published by the US Energy Information Agency on July 8, only six short weeks ago. Back then the Energy Department posited that Marcellus shale contained 410.3 tcf.
But yesterday said Philip Budzik, an operations research analyst with the Energy Information Administration, allowed that the folks at USGS are the experts in this matter. “They’re geologists; we’re not,” he said. From here on out, he promised, EIA will use the updated USGS estimate in their models and calculations.
So how did this number get so inflated? It all started back in 2009 when Penn State University geoscience professor Terry Engelder and a Fredonia, NY geology professor by the name of Gary Lash took some well production data and plugged it into a formula. Eureka! they gasped, looking at the numbers they generated. Those numbers indicated that the Marcellus shale could contain anywhere from 168 trillion to 516 trillion cubic feet of gas. That’s a lot of gas – about 80 to 250 times the government estimate.
Engelder’s magic number zipped around the world before the research could catch up. Pro-industry apologists used it to prove claims of potential energy security and secure leases. The NY DEC pasted it into theirMarcellus information pages. “Geologists estimate that the entire Marcellus Shale formation contains between 168 trillion to 516 trillion cubic feet of natural gas throughout its entire extent,” DEC wrote. But, they cautioned, “it is not yet known how much gas will be commercially recoverable from the Marcellus in New York.”
Pennsylvania’s Dept. of Conservation and Natural Resources had the higher estimate posted on their website as well. They added another report, a study co-authored by Kuuskraa and Stevens that estimates Marcellus shale gas recoverable reserves at 100 to 200 Tcf.
Industry PR folks didn’t let the fact that the revised USGS figure is 1/5 of the number they’ve been touting – they simply ignored that inconvenient fact and highlighted the increase over the previous USGS number.
On late Wednesday the Congressman from New York, Maurice Hinchey told the press that back in June he had sent a letter to the US Energy Information Agency questioning its shale gas reserve estimates. “And for good reason,” he said, referring to the USGS Marcellus downgrade.
Though Hinchey applauds the EIA for announcing it will adopt the USGS estimates, he remains  concerned about the process which lead to the original estimates.
“I have additional questions about how this change will impact the outlook for shale gas,” he said. “Considering the reckless way in which hydraulic fracturing has been carried out in other parts of the country, it is important that we understand all of the environmental and economic impacts that would result if drilling were to move forward in our state. That's why it is essential that the public, the markets and policy makers have unbiased shale gas reserve estimates.”
Numbers are important – especially for decision-makers involved in determining our country’s energy future, Hinchey said. “We’ve got to get this right.”
Posted by Sue Heavenrich at 11:57 PM