What NY Landowners Can Learn from TX 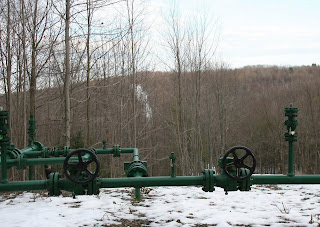 New York landowners hoping to cash in on the projected Marcellus wealth beneath their feet may want to pay attention to what's happening in Texas.
Some Barnett Shale royalty owners who leased to Chesapeake will get a surprise with their next royalty check: less money. That’s because Chesapeake Energy recently announced that they will begin deducting post-production costs of shipping gas through their gathering lines.
Why? Well, says Henry Hood, senior vice president and general counsel for the huge gas corporation, post-production costs run from 70 cents to $1 per 1,000 cubic feet (mcf) of gas produced. And with gas prices sagging around $4 per mcf, they’ve got to do something to recoup their costs (besides leave the gas in the ground until it’s needed).
According to the Dallas/Fort Worth Star Telegram, Chesapeake’s decision to assess royalty owners for post-production costs was triggered by its agreement with Total – the French oil giant that forked over $2.25 billion for a 25 percent interest in Chesapeake's Barnett Shale operations. The French company is deducting post-production costs from its share of the royalty checks so Chesapeake figured this was a good time to jump on the bandwagon. You can read their notes to royalty owners here.

Of course, if you have a lease that doesn't allow them to deduct post-production costs, you're all set.
Posted by Sue Heavenrich at 7:17 AM