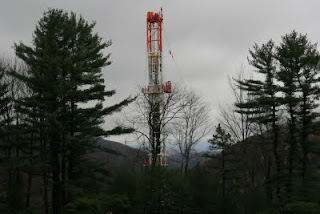 When you buy a home in upstate NY, one of the things you do as a matter of course is test for radon. That's because many of the rock layers beneath our homes contain naturally occurring radioactive material - "NORM" for short. And for years the NY Department of Environmental Conservation (DEC) has held the view that normal disturbances of NORM-rock, such as mining and drilling, do not generally pose a threat to workers or the general public.

But recent tests of brine from Marcellus wells may change that.  In October 2008 and April 2009 the DEC submitted 13 brine samples from twelve Marcellus wells that were actively producing gas last year. Test results came back with higher than expected levels of NORM. Some brines had levels of radium-226 as high as 250 times the allowable level for discharge into the environment and thousands of times higher than the maximum allowed in drinking water.

Radioactivity in Marcellus shale, present as trace elements uranium-238, thorium-232, radium-222, radium-226, and radium-228, is not uniform; it varies from place to place. Over time these radioactive particles decay, with half-lives anywhere from 4 days to 1600 years. And while some exposure to radiation is unavoidable - we're all exposed to a certain amount of background radiation - it doesn't necessarily mean it's harmless.

Exposure to some radionuclides – even at low levels – can cause bone cancer, stomach and lung cancers and other health problems. Radon gas, long known to be associated with Marcellus shale, has been shown to be the primary cause of lung cancer among people who have never smoked.

So the Environmental Protection Agency (EPA) has established guidelines for certain radionuclides: the maximum contaminant level of radium in drinking water as 5 picocuries per liter (pCi/L), for uranium is 30 pCi/L and for the total alpha emitters is 15 pCi/L. They've also established levels that can be put into the environment: the maximum level of radium-226 allowed to be discharged in wastewater is 60 pCi/L and the maximum levels in soil are 5 pCi/g on the surface and 15 pCi/g in subsurface soils.

But in some of the Marcellus brines,  DEC found levels of radium-226 ranging up to 16,030 pCi/L - more than 3200 times higher than the allowable levels in groundwater and 267 times higher than what’s allowed to be discharged into streams.

These higher-than-expected levels of radionuclides does present a problem, given that the current waste treatment option for gas well brines is to transport them to a public wastewater treatment facility. And this past summer the New York State Department of Health (DOH) raised those concerns. According to a report by ProPublica, the DOH sent a letter to DEC warning of public health issues related to disposing of the drilling waste. Wastewater treatment plants will need to do more thorough testing before accepting drilling fluids, noted DOH, and workers may need to be monitored for radiation in much the same way as workers at nuclear facilities.

Four of the twelve or so active Marcellus wells in NY are operated by Fortuna, and all four of those wells are located in the little town of Orange, in Schuyler County. Given the relatively low volume of wastewater of the current vertical wells - compared to what’s expected from the horizontal Marcellus wells - and given the lack of local industrial wastewater treatment facilities, it is unclear how the gas companies expect to deal with disposal of Marcellus brines.

But one thing is certain: the DEC has not set out any rules regulating radionuclides. Instead, they will run another series of tests, says DEC spokesman Yancey Roy. Rick Kessey, an engineer at Fortuna, agrees that more tests are needed. The DEC’s test results aren’t wrong, Kessey said, but they do seem “out of whack” with previous tests.

Meanwhile, the Marcellus wastewater has to go somewhere. In the past, DEC has allowed brine to be spread on roads to help melt snow and keep down the dust. But public comments at DEC hearings and the recent Marcellus Shale summit held in Owego earlier this week indicate that people aren't comfortable with the idea of "hot salt" on their roads.

There's another problem, too, says Roy. The DEC is concerned about the potential buildup of radioactivity in scale inside casings, pipes and other drilling equipment. That equipment may have to be monitored, Roy said. In addition, the DEC is concerned about potential accumulation of NORM in the sludge from treated wastewater. Radioactive waste can’t be dumped in any municipal landfill in New York State, so that means shipping the waste to Utah, Idaho or other western states that have licensed disposal facilities.

You can read the results of the brine tests yourself in Appendix 13 of the DEC’s Supplemental Generic Environmental Impact Statement -click on Appendices part 1.
added December 21: You can read more about radioactivity in brines in this article from Broader View Weekly.

Posted by Sue Heavenrich at 9:33 AM