Arcuri to Industry: No More Exemptions! 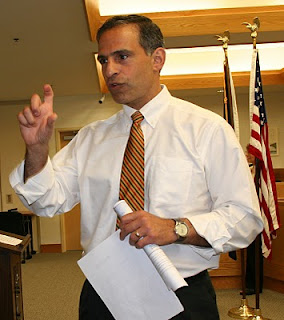 NY Congressman Michael Arcuri has teamed up with Maurice Hinchey in an attempt to force the natural gas industry to clean up it's act - and in the process, play by the same environmental rules as all other industries.He's starting small - just asking that oil and gas drillers abide by the same storm water runoff regulations as every other industry.

On July 1 he offered an amendment that strips that exemption during the House Committee on Transportation and Infrastructure’s consideration of the Oil Spill Accountability and Environmental Protection Act of 2010 (HR 5629).

Arcuri’s amendment would help protect surface water from drilling site runoff contamination by removing the special exemption from the Environmental Protection Agency’s (EPA) storm water permit requirements through the Clean Water Act. A farmer has to get a storm water permit when he’s putting up a new barn, Arcuri said. So does a homebuilder developing a new subdivision. But oil and gas drillers get a free ride when constructing their well pads.
“It’s about holding oil and gas to the same environmental standards as we hold every other industry,” Arcuri said. Before 2005, EPA began issuing storm water regulations for the construction of oil and gas drilling sites.  However, the Energy Policy Act of 2005 halted that process. That bill allows the oil and gas industries numerous exemptions, among them a permanent exemption for all construction activities related to oil and gas exploration and production.
That doesn’t make sense. “By allowing oil and gas drillers to construct their well pads and access roads with out permits, we assume they’ll take the necessary precautions to prevent storm water runoff,” Arcuri said. Erosion precautions aren’t extravagant – straw bale barriers and silt fences can prevent storm water from carrying pollutants into rivers and streams. Preventing pollution is a lot cheaper than paying for the clean-up, Arcuri noted.
Development of natural gas in Upstate New York has the potential to bring tremendous economic benefit to the region, Arcuri said, but he is concerned that "fast-tracking" may lead to more incidents the BP oil spill.
what troubles Arcuri more than “fast-tracking” is the realization that most gas wells in this area will be drilled on agricultural and forested land. The rate of sediment runoff on construction sites is 10 to 20 times higher than on agricultural land and It’s 1000 to 2000 times greater than on forested land.
“If we continue to exempt the oil and gas industry – which is already constructing wells all across the watershed – from permitting requirements for storm water discharges, it will place even greater burden on our farms, taxpayers and water system rate payers,” Arcuri said. And that’s particularly unfair to local farmers who are doing their sediment control right, he added.
Despite heated debate the committee passed Arcuri's amendment with bipartisan support. Now, Arcuri says, the “Oil Spill Accountability and Environmental Protection Act of 2010” heads to the House floor where he expects tough opposition. Arcuri says he’s ready for a fight. Furthermore, he’s already thinking about the next piece of legislation that will strip away some of the other special exemptions the oil and gas industry enjoy.
“If we can’t do it in a single FRAC Act, we’ll make it happen piece by piece,” Arcuri said.
Posted by Sue Heavenrich at 12:43 AM