Sandra Steingraber on Fracking and Cancer 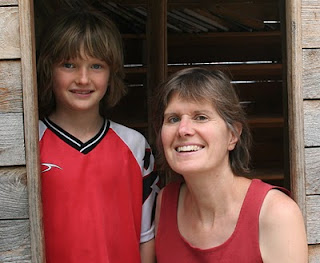 Google "Sandra Steingraber" and you'll learn that she is an ecologist, author, cancer survivor. An inter-nationally recognized authority on environmental links to cancer and other health problems, Steingraber is currently a scholar-in-residence at Ithaca College. She is also the author of the highly acclaimed book, Living Downstream, which was recently made into a movie.

But when we settle onto the grass near the bridge in Trumansburg it becomes immediately clear that Steingraber sees her most important role as a parent whose responsibility it is to keep her children safe from harm.

As Steingraber keeps one eye on her eight-year old son, Elijah, she talks about her recent trip to . She was one of three participants in a congressional staff briefing that focused on the President's Cancer Panel report, “Reducing Environmental Cancer Risk” released in early May.
There is a disconnect between scientific evidence and regulatory response, Steingraber says. The Toxic Substances Control Act (TSCA), for example, regulates the introduction of new or already existing chemicals. But it grandfathered in most existing chemicals and, says Steingraber, “It is so weak that it couldn’t even ban asbestos. Even US industries recognize they are losing market share in the European Union because of this law," she says. The reason? The European Union embraces a precautionary approach to regulating industrial pollutants.
In contrast, the takes a reactionary approach in regulating chemicals, forcing citizens to bear the burden of proving a chemical causes harm. “Stronger regulation is needed,” Steingraber says, echoing words scribed by the President’s Cancer Panel.
Industry is, and has been for years, exploiting regulatory weaknesses at a high cost to the nation - $243 billion just from cancers alone, from one single year (2009). Steingraber points to a recent study in ; it shows that the entire economic benefit to the state from the coal industry is wiped out by the mortality and lost productivity of sick coal miners.
“Cancer is not cheap.” Steingraber speaks from experience. “Forget about having a retirement fund or money in the bank.” Individuals aren’t covering all the bills, she says - it's taxpayers who underwrite the cost of environmental pollution.
The President's Cancer Panel panel urged Obama to use the power of his office to “…remove the carcinogens and other toxins from our food, water and air that needlessly increase health care costs, cripple our Nation’s productivity, and devastate American lives.”
direct implications for high-volume hydraulic fracturing," Steingraber says. "Fracking means deliberately introducing carcinogens into our land, water and air." Even if there’s not a single chemical spill there will still be problems: diesel exhaust from trucks, emissions from compressors at the well site, emissions from compressor stations and leaks in pipelines.
“Then you have the chemicals themselves.” Steingraber cited the recent revelation of 981 gas and oil spills in . Frack fluid, combined with produced water (brine) accounted for more than 80 percent of the 5.2 million gallons spilled.
“Spills seem to routinely accompany the process,” Steingraber said. “Maybe we can clean up surface spills. But shattered bedrock – there’s no fixing that.” She looks up at her son. “Industry shouldn’t introduce technologies where, in the worst case scenario there’s nothing to be done.” Reflecting on the BP spill she says, "We go deeper into the ocean, with catastrophic results. We remove mountaintops for coal, with catastrophic results. Now we’re fracking for gas ... with catastrophic results. How far are we willing to go to get this energy?"
If we fully factored in the true environmental costs of fracking, Steingraber pointed out, it would mean counting the diesel fumes from trucks hauling water and chemical to the site, and frack fluid and well waste from the site. It would mean factoring in the run-off and erosion from drilling pads and access roads, chemical spills and wear and tear on local roads and infrastructure.
“The only way to get shale gas is through fracking, and the only way to do fracking is to degrade the commons,” Steingraber said. “This is the most urgent environmental issue we now face.”
You can read Steingraber's blogs and articles on her website.
You can read the President's Cancer Panel report here.
This post was excerpted from a longer article in the July 5 issue of Tompkins Weekly
Posted by Sue Heavenrich at 1:28 PM