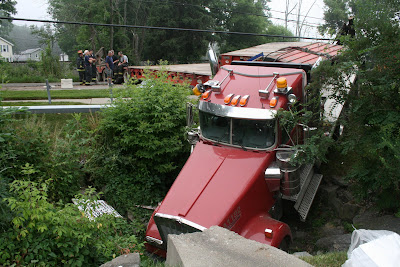 photo provided courtesy of Wendy Post of the Times-Shamrock Group
On Saturday, June 26 at 5:30 am some residents of Owego, NY were woken up by a loud noise that sounded like a train disengaging rail cars. Then the power went off. The cause? The driver of a flatbed tractor trailer owned by 5J Oilfield Services (out of Palestine, TX) was driving Route 17C through town too fast, lost control of his rig and sheared off several telephone poles and a guardrail while trying to negotiate a gentle turn in the road. The cab of his truck ended up in the stormwater drainage ditch in front of a local family practice clinic.
When police arrived at the accident scene, the driver was no where to be found. My colleague, Wendy Post received a call about the accident and ran down to take photos. She was so intrigued by the missing driver (found later) that she followed the story throughout the day. You can read more about it and see her photos here.
Back in March the Pennsylvania State Police reported on overweight trucks traveling (PA) roads.One tractor trailer, driven for 5J Oilfield Services was clearly in violation of its permit, weighing in at nearly 53,000 pounds over the limit. The driver was fined more than $16,000 and released.
Less than 24 hours later, police stopped two more trucks from the same company at that same location after people called in traffic complaints. Both trucks were oversize and overweight. The drivers were fined more than $10,000 and released.
If you want to find out anything about Schlumberger, a company located in Horseheads, NY that will be trucking chemicals and gas-field supplies to drill sites located in NY, PA the surrounding area, you can read all about them on their website. They provide a lot of info. But if you wanna find out about 5J Oilfield Services you get this, a page "under construction". No website, lotsa violations, and an LLC to boot. Makes you wonder exactly what the gas industry means when they say they have everything under control.
Posted by Sue Heavenrich at 11:33 AM