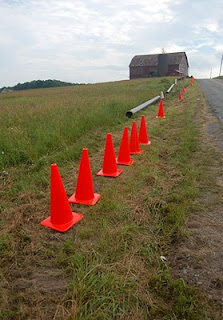 Six months ago, when Chief Oil & Gas approached landowners in Hop Bottom, PA about leasing land for a gathering pipeline, a number of residents weren't interested. Long-time resident Linda Lewis was adamant that she didn't want gas drilling on her land - and she certainly didn't want pipelines running through her land. Neither did her neighbor, Lynn Butler.

Now Chief Oil & Gas has set out lines of bright orange plastic cones along State Route 2002, pounded stakes flagged with neon surveyor’s tape, and laid out a line of 12-inch pipeline sections along the side of the road. This gathering line will transport the gas produced at three wells to a compressor station.

Before it gets to that compressor station, the gas will travel across Lewis's front yard and within feet of Butler's barn. And that's got both women, and a bunch of neighbors, pretty riled.

Why couldn't they run the pipeline beneath the abandoned field across the road from her, Lewis wonders. "Nobody lives there; it's been empty for the last 40 years." She says she's called Chief Oil & Gas numerous times, but they still have yet to return her calls.

Now Lewis wonders how – and whether – she can prevent the gas drilling company from installing what she sees as a potential explosion hazard so close to her home. She also wonders how Pennsylvania Department of Transportation (PennDOT) can so cavalierly give away rights to put in a pipeline on what she clearly thinks is her land. 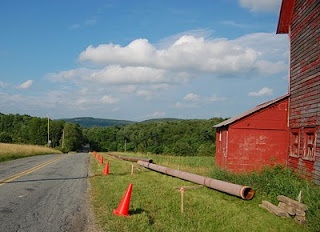 PennDOT feels they are simply doing their job. The state owns the right of way, says spokes-person Karen Dussinger, explaining that right-of-ways may extend anywhere from 25 feet to 50 feet or more from the center of the road. The state allows DOT use of the right-of-way through an easement. PennDOT, in turn, permits certain utilities – gas, water, sewer, aerials, communication and power companies – to use the land beside the state highways.


"We cannot deny anybody access as long as they meet our permit requirements," Dussinger said.

Lewis and her neighbors wonder whether Chief Oil & Gas actually meets those permit requirements. According to Robert Kretschmer, one of the permit managers at Code, Chapter 459 provides regulatory guidance on issuing those permits. Its title is “Occupancy of  Highways by Utilities” – and that’s the very question Hop Bottom residents are asking DOT: is a drilling company putting in a gathering line considered a utility?

This is not a trivial question, because utilities may obtain property through eminent domain – something pipeline companies in have been using for a number of years. But at least eminent domain would mean being reimbursed for the use of your land. It would also mean public hearings – and an opportunity to challenge the proposed pipeline.
Lewis and her neighbors had no opportunity to challenge Chief’s pipeline plans. There was never any public conversation about the project.
“That’s because public hearings and notification of property owners along the right-of-way are not required,” Kretschmer said. PennDOT accepts Chief's status as a utility because they ultimately serve the public, no matter that the neighbors see it serving the corporation.
Dussinger adds that if the facility in any way directly or indirectly results in service to the public or any part thereof, the "serving the public" requirement is met.  The facility distributes gas to their plants for removal of impurities and then is delivered directly to homes or businesses through local distribution lines.  And that, says PennDOT, indirectly results in service to the public.

note: comments from Dussinger and Kretschmer come from telephone conversations in the course of investigating this issue.
Posted by Sue Heavenrich at 11:57 AM