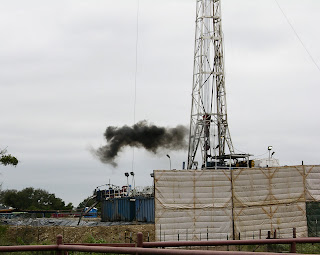 story updated Thursday afternoon
Two weeks ago Range Resources announced that they would voluntarily disclose hydraulic fracturing chemicals used in drilling Marcellus Shale. At that time they provided a link to a "sample Marcellus Shale Completion Report" and seemed to imply that interested people would be able to find a list of all the fracturing chemicals they use somewhere on their website.

While it's true that Range Resources has a link to the information on their home page, some people were hoping for a handy list of all the fracking chemicals used in Marcellus. At this point in time all that's posted is the initial press release, a description of casing design and one sample completion report.

"Beginning now, completion reports will have an addendum attached that lists the fracturing chemicals, as well as their amounts, used in drilling each well," Pitzarella said. These will be posted to the Company website as well.

Where, exactly? Pitzarella wasn't sure. "We're re-vamping the website and hope to make it easier for people to find information," he said. Soon, meaning sometime within the next 4 weeks (but earlier, he hopes), there should be a button on the left column guiding people to "completion reports" or "hydraulic fracturing".  He's still working out the details.

After reminding me again that it was voluntary, Pitzarella said, "We're hoping that these reports give people the facts they need to make their own decisions. Some people are concerned that fracturing chemicals will get into their aquifers. So we want to make sure they know what we're using and the [very small] amounts."
Posted by Sue Heavenrich at 11:15 AM