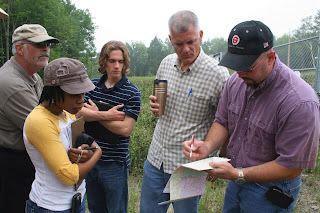 At least that's what's happening a few miles west and across the county line. Central New York Oil and Gas Company (CNYOG) wants to put in a compressor station that will allow them to move gas in and out of their Stagecoach Storage field into the Millennium and Tennessee Gas Pipelines.

The difference is that the CNYOG project falls under the purview of the Federal Energy Regulatory Commission (FERC). That means the proposed project gets an environmental review and well-publicized public meetings - something the Vestal proposal apparently lacks.


On Thursday, July 15 environmental engineers from FERC visited CNYOG's proposed compressor site for an environmental site review. Eight people, including unicipal officials from Owego, as well as representatives from Soil and Water Conservation District, NYS Ag and Markets and local residents, laced up their boots and joined them on the short hike to the site.  It was more people than FERC environmental project manager Rich McGuire (the guy with the coffee cup) expected. Usually no one shows up for site reviews, he said.
The current compressor is located on the Reeves Farm, between and East Beecher Hill in Owego. “The problem,” said CNYOG representative Randy Parker “is that the current compressor just doesn’t have enough horsepower.” They plan to install an electric 13,400-horsepower centrifugal compressor uphill from the current compressor. A new compressor will allow them more flexibility in moving gas from the storage field to the pipelines. They’ll also need an electric substation at the site. 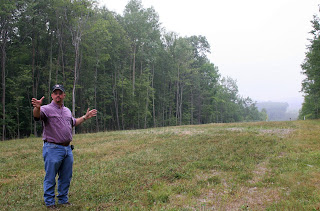 Noise shouldn’t be an issue, Parker noted, because FERC regulations set that level at 55 decibels (dB). When asked about emissions, Parker explained that was the primary reason for building an electric-powered compressor. Except for fugitive emissions from the pipeline, there shouldn’t be any emissions, he said.
McGuire asked, “Why here?” The most important reason, Parker explained, is that it's located close to the Millennium Pipeline. The construction won’t impact other land owners much, and the farmer who owns the land is agreeable to selling the 25 acres required for the access road and compressor. CNYOG looked at other areas but one was too close to the pipeline, and the other was too steep a slope. This site, while near the top of a hill, is fairy level.
So far, Parker said, the only concerns from adjacent landowners are how the compressor construction will affect hunting, and the potential for storm water runoff. 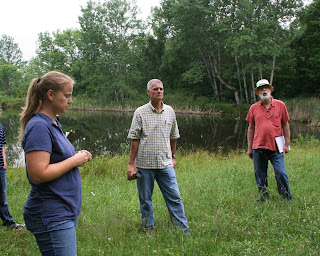 The facility itself will be unmanned, monitored electronically from a distance. In addition to monitors the station will have alarms and the capacity to automatically “blow-down” the walls in the event of a gas leak.
Plans include retaining a wooded buffer between the compressor site and the landowners. “The current landowners are not opposed to the plans at all,” Parker said. “In fact, they plan to incorporate the site into their hay-rides.” And neighboring landowners and hunters seem to appreciate the deer habitat the clearing will provide.
Amy Gonzales, of AK Environmental, is working on the environmental assessment for the project as well. She addressed storm water runoff and wetland concerns. “We will be doing erosion and sediment control during construction,” she said. This includes such things as using a silt fence, hay bales, or erosion control blankets. She also explained that they will re-seed and mulch exposed soil and access roads.
“Erosion control is a major issue on any pipeline project,” Gonzales said. “FERC has a little more oversight and stricter regulations than other agencies.”

Read more about the FERC project here.
Posted by Sue Heavenrich at 11:43 AM